There have been rumors throughout the mobile marketing industry that the web is dying, but before you jump up and call us crazy, let us explain. This theory is based on the primary belief that customers and end users will start to navigate the web more prominently through peer-to-peer networks such as Facebook and Twitter, and thus increasingly on apps in the near future. This is where in-app advertising comes in.

We already know Facebook has grown its empire to over 1 billion users, and Twitter is at about half that with approximately 500 million users. So the first part of this line of thinking has already been proven true with seemingly everyone on at least one type of social network. So if everyone on the web is on social networks, then the other non-social websites aren’t getting as many views or as much traffic as they would like. So why would you advertise on them? Marketing agencies, other websites, and product and service based companies are starting to move their advertising efforts to within apps as opposed to on the web itself.

If you are thinking this is a bad thing, it’s not. Think about it. Advertising on the web has been tough for marketers since visitors to websites usually do not click on banner ads, most notably on Facebook, and they usually view any type of ad as an unwelcome intrusion to their browsing experience. Further supporting this, a recent study by Appssavvy reported that in-app advertising is 11.4 times more effective that your generic banner ads. This only means that in-app advertising is almost as effective as search.

All of this being said, we have put together a few key pointers to know when you begin to develop an “appvertising” strategy for your in-app advertising.

Work From the Inside Out

This is essentially blending your advertising into the app. For example, when Dr. Pepper advertises their product, they don’t simply put a Dr. Pepper can in the background. Marketers have learned that to effectively market the product, in this case Dr. Pepper soda, you want to have a key character actually drink the product during a pivotal moment, such as when the character is very thirsty. So how do you apply this to apps?

Microsoft worked this angle beautifully with nqmoco’s (yes, that’s spelled right) “Godfinger All-Stars” in which players are given the ability to control and manage their own planets. The goal of the game is to grow and make money and ultimately get to the next level, much like any other game. However, Microsoft, working with Appssavvy, created a Windows Cloud to put IN the game. Users could then visit Microsoft’s cloud the same way they could visit friends’ planets while also getting the opportunity to earn money within the game. They could also click through to a mobile landing page to learn more about Microsoft’s Windows 7. The campaign resulted in 10% of the game’s players visiting the cloud, or 6.1 million visits. All because Microsoft put themselves IN the game.

Give Incentive to Viewers and Gamers

If you don’t want to go through the work of placing yourself within the game, then you can forget blending completely and simply give your consumers and gamers incentive to view your ads. This involves you giving them some type of in-app currency in exchange for sitting through an advertisement.

SocialVibe was able to implement this strategy by giving currency to players who viewed their “Big Game Tournament”, which featured characters from FarmVille, YoVille, FrontierVille, and others in a football game that was sponsored by Kia. And boy did it work. SocialVibe ended up generating the highest time-spent-per-user of any SocialVibe game, ever! The average time? 170 seconds, which is unheard of when it comes down to literally paying virtual money to have viewers see your ads.

SocialVibe went on to receive $20 million from Northwest Venture Partners as a result of their successful campaign. Not too bad for a little in-app marketing.

You can settle with standard in-app advertising and just get standard results. Or you can choose to create rich media and get rich results. It has been proven that rich media performs much better than standard advertisements, so if you’re really wanting to garner results out of your in-app marketing strategy, then you will want to be creative and imaginative with your media and advertising. Draw people into your ad. Don’t let them just dismiss it as another annoyance while they are within the app. 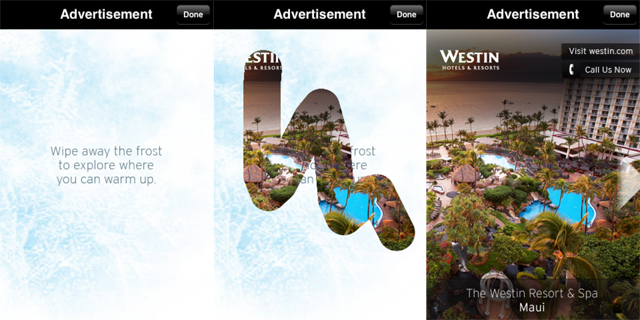 Westinn Hotels has a great creative app which actually engages the user from the beginning. Users are introduced to the app with a “frosted” screen that asks users to “warm up” by rubbing their finger on the screen to “remove” the frost. As you move your finger removing the frost, a nice, warm Westinn Resort is revealed underneath. This was a very simple concept, yet it fulfilled the purpose of drawing the user into the app and engaging them right away.

So you can see that there are different ways of approaching in-app advertising, or “appvertising” as it is becoming known. The good thing for marketers is that in-app advertising is relatively new to the industry, so there is still a little time to figure out its nooks and crannies. However, if you take too long to implement mobile in-app advertising into your overall marketing strategy, you will find yourself and your company on the outside looking in when it comes to mobile marketing in general. Don’t be one of these companies!

Want to join the discussion?
Feel free to contribute!

Mobile Marketing and Social Media in the Restroom | Where CAN’T You M...